This project comes from Russ Barkman of the Tumalo Langlauf Club in Bend, Oregon.

There are some snowmobiles, in particular those with liquid cooling systems that seem to have trouble staying cool at low grooming speeds. But even the most popular fan cooled snowmobile used for grooming, the Ski Doo Skandic, also will overheat when pushed far enough.

The supplemental fan and the enlarged air intake should allow an operator to do more work while keeping the engine temperature at a safe level. If you are reluctant to make these sort of modifications to your brand new machine, then at least consider the pyrometer. Look at it this way: Why would anyone NOT spend around $200 for a gauge that could prevent an operator from burning up the engine on a $7000 snowmobile? Once you can monitor your engine temperature, you will be able to see the particular conditions that may be causing your machine to work too hard and overheat. Perhaps that information will enable you to change the way you groom, or convince you to make the changes to the snowmobile that Russ has. In any case, without the pyrometer the only way you really know for sure that the engine has overheated is when it seizes up.

In discussions with Russ, I asked him a few questions about his project:

Q – What experience have you had with your Skandic overheating prior to the modification and how does it work now? Any comparison to other snowmobiles? In what kinds of conditions do you experience the overheating – ambient temp, snow conditions, terrain?

A – Prior to making these changes we experienced two engine seizures, in both cases the temperature was 40 plus. The first time the operator was pulling the tracksetter in fairly soft snow on a steep uphill. The second time I was pulling our roller over fairly gentle terrain and at that time there was about four inches of new snow over older hardpack. We have made some changes in our grooming procedure. We never start grooming if the temperature is over 40. The problem is that often the temp goes up after we start so it’s necessary to monitor ambient temps. We have also been stopping the machine every hour or so for one of the aforementioned cool downs. We have also switched to 100% synthetic oil. These modifications and changes are not the cure-all for overheating the engine but should help reduce the risk.

Q – Was the pyrometer a stock dealer item specifically for the Skandic, or was it an aftermarket product? Any idea which model/brand so that if someone walked into a dealer they could ask for the same one?

A – The pyrometer is an after market product. I don’t know the name. It was one of several in the dealer’s parts catalog. They are commonly used by snowmobile racers. Because of the work load we put on these machines, the mechanic says they need some of the same modifications and the same treatment that racing machines get, thus the cooling modifications, synthetic oil, and the after use cool down. The after use cool down is very similar to the process of letting your diesel engine run for a few minutes after prolonged use to cool the turbocharger cooling oil to prolong the life of the turbo bearings. 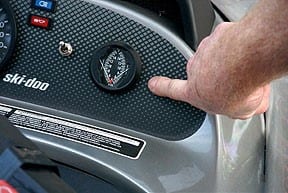 This is the pyrometer as it is mounted in the instrument panel. The pyrometer measures the exhaust gas temp. at the exhaust manifold exit. There is a needle for each cylinder. Temperatures should not exceed 1200 degrees to be safe. The left cylinder which is the farther from stock fan tends to run a little hotter then the right. Also included in this picture is the toggle switch that controls the added aux. fan. Soon to be added is a small red light that will light when the fan is on. Because the fan is wired directly to the battery it must turned off manually after the engine is shut down to prevent battery drain.

This is a close-up of the fasteners used to mount the fan. The bolts, nuts, and washers are 1/4 inch. You will also need to use 1 inch plastic spacers so the fan will clear the intake wire mesh. 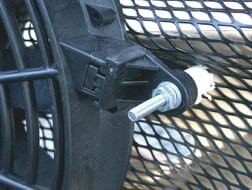 This is the fan as it is installed. When the fan is mounted, center it over the back of the front air intake on the cowl. Hook the plus wire directly to the battery for the best source of power. The fan I used is a 9 inch engine cooling fan from JC WHITNEY 1-800-529-4486 {catalog part number 38KS301N}. This particular fan pulls the air which is needed in this installation. The cost of the fan is $59.95 plus shipping. The fan comes with a switch but you’ll need some extra wire. 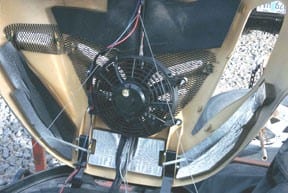 This picture shows a modification to the air intake opening for the regular engine cooling fan. Using an electric saber saw cut approximately 3 inches from the rear of the opening. Leave about an inch of material between this opening and the next one. You will have to remove the wire mesh from the inside of the cowl before making this modification. Increasing the size of this intake allows more air to reach the engine fan.

The installation of the fan and other modifications took approximately 2 hours. The total cost was around $280.00 which includes the dealer installed pyrometer.

← How to Get a Snow Groomer Unstuck Grooming a Ski Park →